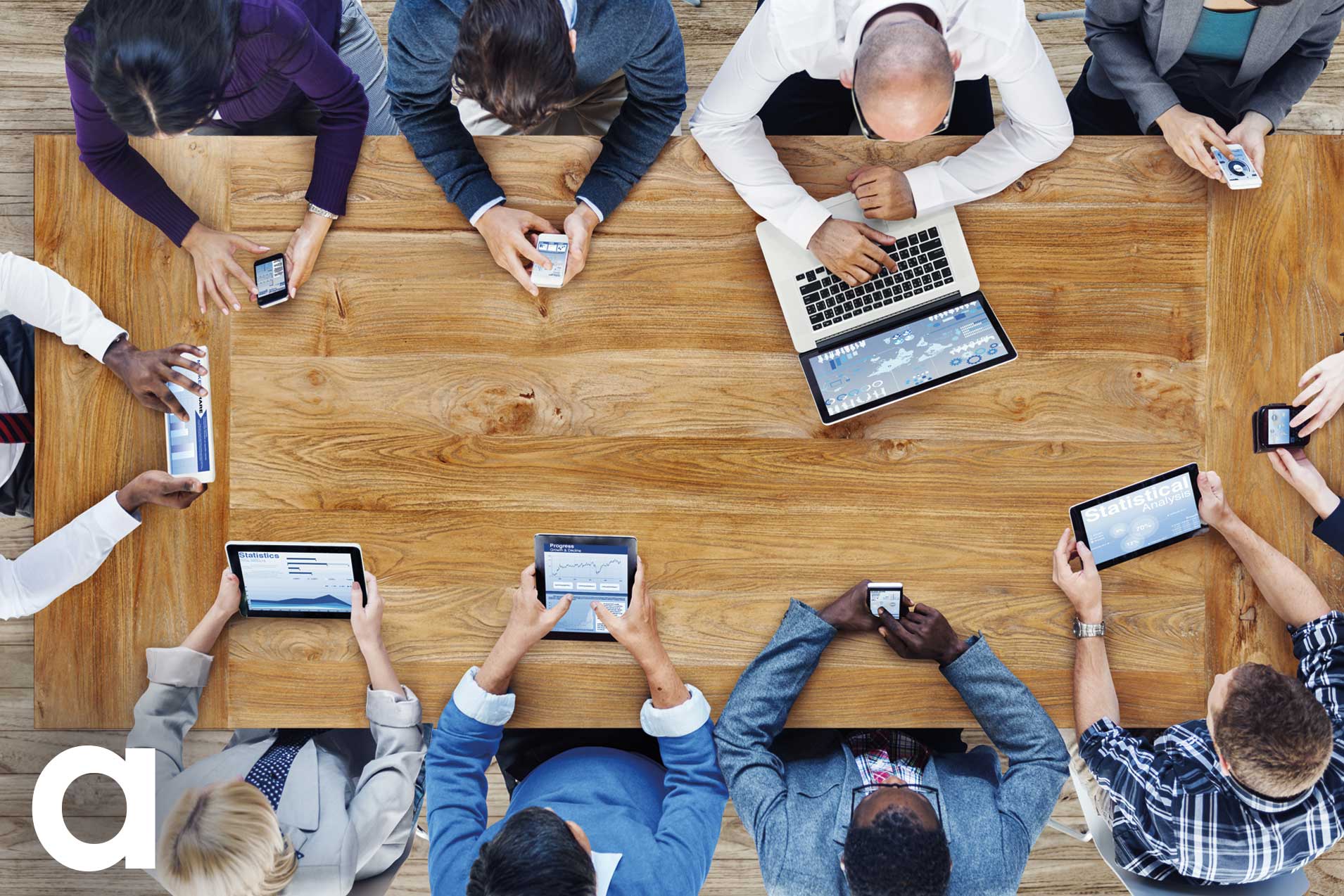 02 Mar So, you think you have a mobile device strategy? Well, OK then…

Just to make things a little interesting, I’m going to start this article with a mental raising of hands – bear with me!

For the avoidance of doubt, in this article when we talk about “mobile devices” we’re primarily focusing on smartphones, tablets and notebooks – but to an extent, this also applies to desktop machines.

Raise your (virtual) hand – and keep it raised – if you currently have mobile devices within your estate or are planning on having them in your estate in the near future.

Keep your (virtual) hand raised if you are currently managing this estate in some way within something akin to Mobile Device Management. If you don’t know what this is, hand goes down! OK, we’re getting somewhere. If you hand is now down, pay special attention to the “Management, Management, Management…” part of this article!

So… let’s assume that you’re managing the estate in some way then. When you initially rolled it out (and if you’re planning a roll out), keep your (virtual) hand raised if there is a plan for wireless capacity (which is different to wireless coverage – more on that later), a plan regarding your internet connection including a backup line and capacity planning, an updated Acceptable Usage Policy, a communication policy regarding what to expect from the new technology, a training process for staff and digital leaders, device training for students and – in the case of tablets especially – an application strategy to avoid having a billion apps installed (most of which do the same thing)? Aaaaaaand Breathe.

Hand still up (if it is, you can put it down now)? If so, major kudos to you – unfortunately, it’s not a tradable currency, but it’s certainly an achievement either way.

Most likely, you’ve seen that list and are either not involved in those areas of your organisation, or some of those elements aren’t in place. However…involved or not, it’s extremely important to make sure that these facets – and more – are addressed to ensure the success of mobile devices within your estate.

Ultimately, we can help… this wouldn’t be an article in a magazine distributed by a company like us if we couldn’t!Below are some specific elements mentioned above in a little more detail to give you a flavour of what’s involved in not only succeeding, but excelling in embracing mobile devices within your environment…

Planning Essentials
So, this is effectively stage 1. Planning Essentials is a program initially developed by Apple – but delivered by a small selection of organisations such as us – to ensure everything is accounted for and no stone is left unturned when it comes to excelling with mobile devices. The workshop is free in terms of cost, but does require the time and mental buy-in from senior leadership within your organisation… you give us the time, we give you the value. In these sessions, we cover all the facets covered in the “raise your hand” shenanigans above, but also a whole host more.

Ultimately, you leave the session with a list of elements that need to be addressed, allocation of ownership and responsibilities, an understanding of what’s involved in the journey and ultimately… a timescale.

It’s not uncommon for us to suggest for a customer to push back the purchase of new devices at the end of one of these, based on what needs to be accomplished beforehand to get it right. Bit weird for a company that makes money by selling stuff, right? Wrong! The ultimate aim here is to make sure you succeed… if you succeed, we succeed. This is a partnership as far as we’re concerned, not a high-street shopping spree.

This is a valuable thing for any organisation to undertake – school, college, MAT, university, whatever…and doesn’t need to be before you have mobile devices in your estate; it can be done at any time!

Right, that’s the most salesy bit of this article over with now, on to the more nerdy stuff…

Wireless coverage ! = wireless capacity!!
(Just in case you haven’t come across it before, “!=” means “is not equal to” in various coding languages. Why did I put it in the title of this article? Because nerd, that’s why.)

One of the biggest things we see overlooked in mobile device deployments is the wireless infrastructure… the result of this is that devices appear “slow” to users and ultimately, the device is blamed for not being up to scratch. This can damage the reputation of the deployment, which in turn reduces the potential for the devices to have the most positive impact in the environment.

But why does this happen? Good question – usually, it’s because wireless coverage is mistaken for wireless capacity; just because you can get “full bars” throughout your building and a wireless survey has been conducted that shows green everywhere, this doesn’t necessarily mean that your Wireless Access Points can cope with the density of devices that are about to befall them. Density is important, because if your wireless infrastructure has been coping well with what you currently have, it doesn’t mean that it’ll cope with a bunch more devices being in a place they previously weren’t.

Think of it like this… a motorway can have three lanes, and you can go 70mph if the lanes are clear (there’s your “coverage”). However, in rush hour, with a substantial increase in traffic than is present in the day, you’ll be lucky if you go above 30mph. How do you fix this? Add more lanes! This may just be adding more radios to your existing access points or upgrading them entirely. Well worth bearing in mind before an influx of new devices.

…and I don’t mean “we manage them with a Mac Mini in a room that does some profile stuff” or “we blast out a new image to our Macs every x months”. I mean proper, actual Mobile Device Management. Management whereby a device can be anywhere in the world and you can control it… not only control settings, but lock it, wipe it, remotely install stuff on it and much more. If you don’t currently have this capability, you really, really need to consider it.

Even if you are managing your devices, are you managing them using the right system? Especially when you have macOS devices, ensure that you can apply Operating System patches and upgrades (because security), install application packages (not just apps from the App Store), patch applications (…not just from the App Store!) and provide a self-service environment to your users that means they can download select applications on the fly without needing to talk to IT! This is all pretty much best practice and baseline, but you’d be surprised how many Mobile Device Management systems can’t do this!

The “boring” stuff
Yes, this is all the stuff that was mentioned last in the intro section of this article. Not particularly techy, but still needs a good bit of thought around it.

So, while this might not be the most interesting thing for most people considering mobile device deployment, it is extremely important. Not only because it’s best practice (or required by various certifications in the case of an Acceptable Usage Policy), but also because certain elements – such as a communication policy, and training – are absolutely key to the success of mobile device integration to an environment.

It sounds pretty obvious, but in reality, these types of things are the elements that can end up getting left until the end or missed completely, because the technology is the main focus. Ultimately, these need to be addressed at the start of the process as they may well change the course of the deployment itself.

What if, during some initial focus groups and training sessions, you discover that accessibility features are actually a key focus in some areas of the organisation? This could be as simple as changing the text size or hue of a device’s screen, for example. Is this something that you let the users do themselves (bearing in mind they have accessibility needs in the first place), or do you target their specific devices? If the latter, how are you going to do that… specify a device per user with these requirements up front, or give them a self-service option? Again, this may seem small – but once deployed, trying to target two devices out of a thousand device deployment when you don’t know to whom these belong in order to retroactively apply settings can literally be like finding a needle in a haystack.

Wrapping up
So that’s it for now! Admittedly, this could have been a much longer article, but based on not intending to take up the entirety of this edition of the Educator, I’m going to end it here. The main thing to take from this is that there is much more to a successful implementation of mobile devices than “stick the tech in and whack some MDM on it”. It may seem a bit overwhelming but – funnily enough – we’re here to help… so give your Account Manager a call if you want to get stuck in!